Lady's Vanity from Hathaway's in NYC

It's another vanity....I hope you don't tire of my posts of them.  This one caught my eye because of her long, spindle legs...all 8 of them.  When I went to pick her up, her owner mentioned it had been his mother's dressing table.  It was purchased from Hathaway's in NYC in the 1940s.  I have such a romantic feeling about old New York...my heart melted. 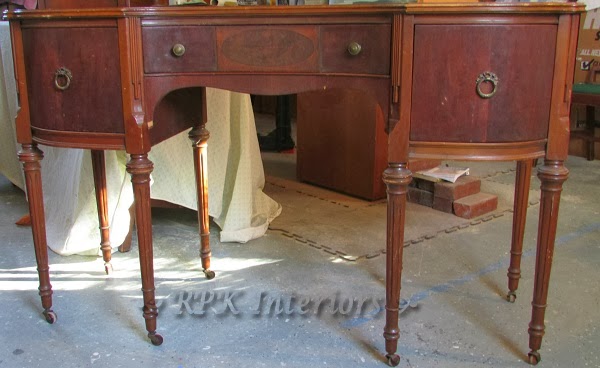 I had her for about 6 months before starting the 'relove'.  Some of you are so talented and can see the vision right away.  Sometimes it comes easily for me, but this one took awhile.

I decided on a base coat of Old Ochre and a top coat of Paris Gray.  After distressing, I added a very subtle wash of Old White...just to give the Paris Gray a little variation.  Clear and dark wax finished her up. 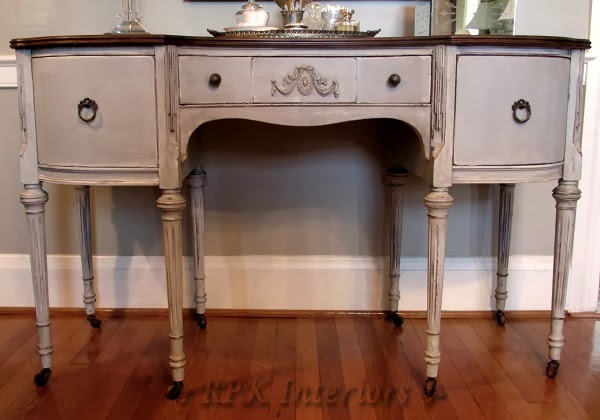 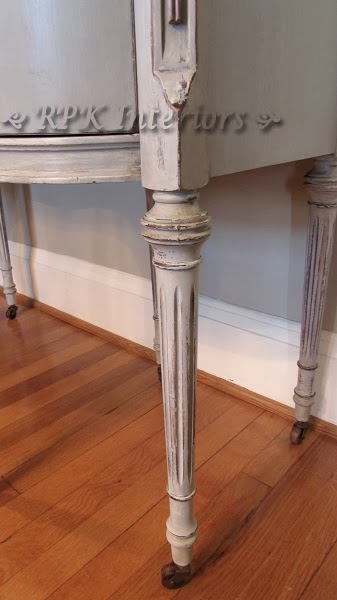 Unfortunately, I didn't take a 'before' shot of the top.  It wasn't in terrible condition, but needed some love.  Here it is after the stripping, sanding, and staining. 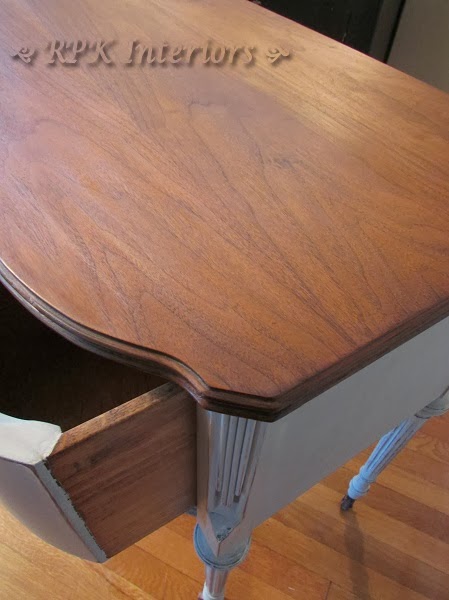 I swoon when I see this.  I asked my Facebook Family what they thought I should use on the top, wax or poly.  What do you think they voted for and what do you think I decided to do? 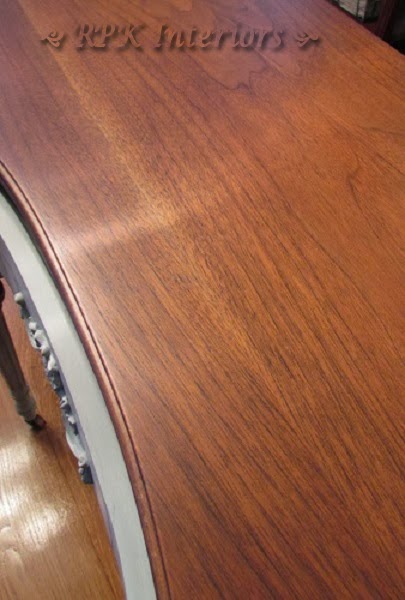 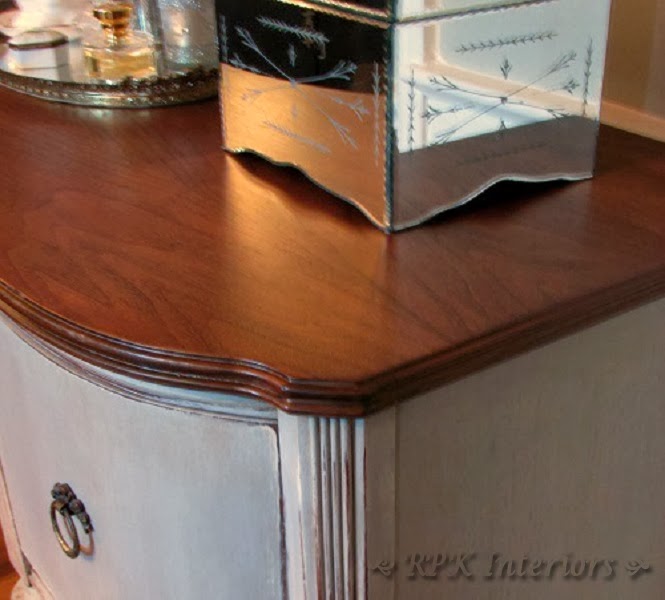 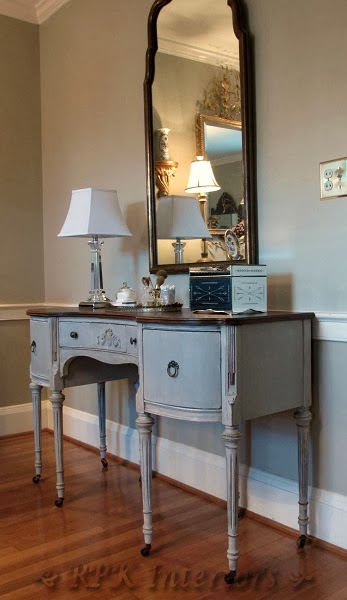 I finished her up with the original hardware...I think the patina from the hardware ties in the deep color from the refinished top.

On another note, I hope you all know that I really appreciate your comments, both positive and constructive.  I don't know all there is about 'reloving' furniture, but I am eager to learn.  I try to share my travels with each project so you can hopefully glean something from my thought process. If, however, you would have done something differently, please, please share.  We can all learn from each other, in my ever be it so humble opinion and that's what I would like this blog to be about...learning and growing in our craft.

As always, thank you so much for stopping by.

Am I the only one who gets annoyed by the crusty stuff that develops on the paint can after you've used it a few times?  And then those nasty, dried pieces start falling into the can and you spend half of your painting time trying to remove chunks of paint after every stroke of the brush?  ANNOYING!

I've found a simple, inexpensive way to avoid all of that mess. 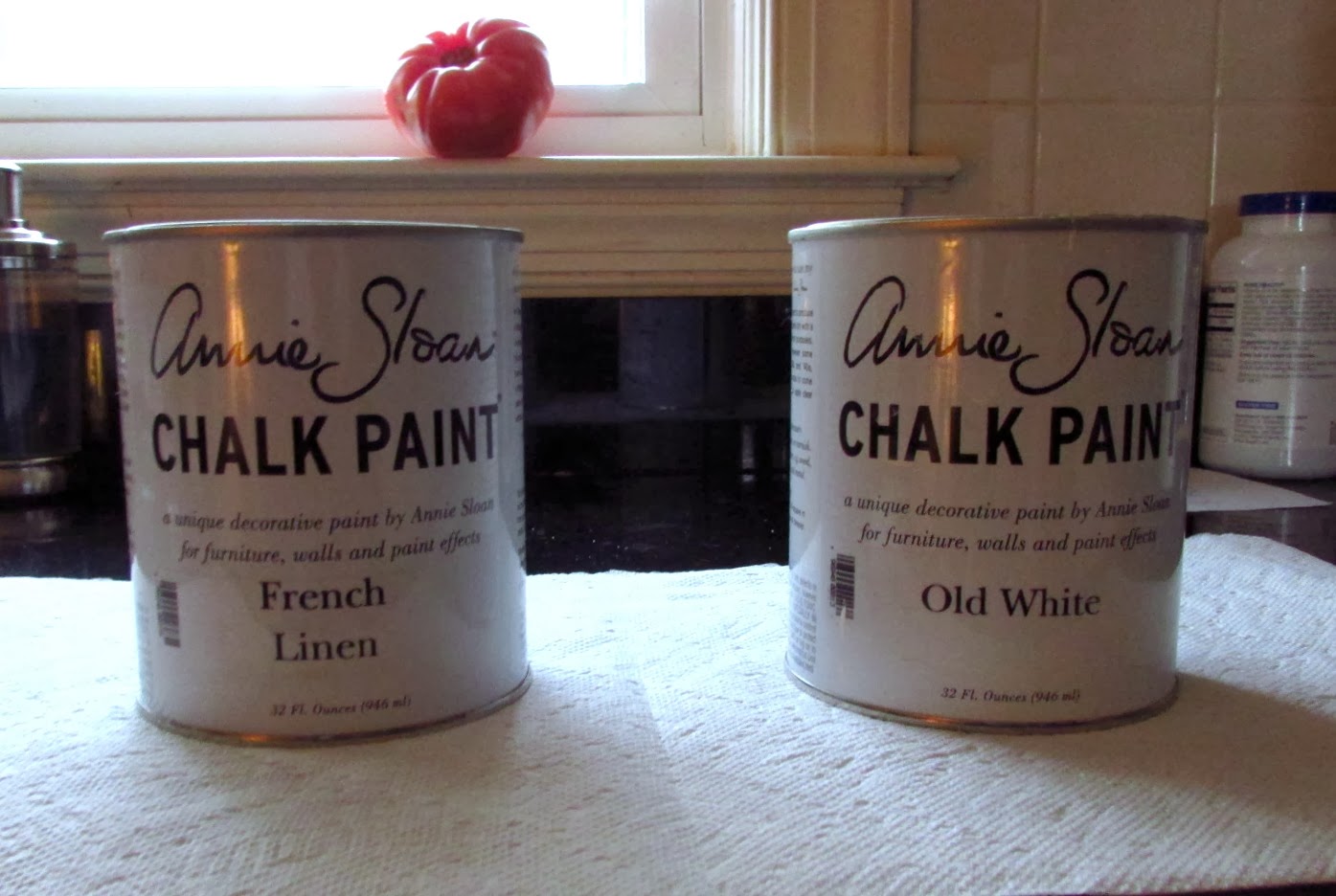 Now can you tell? 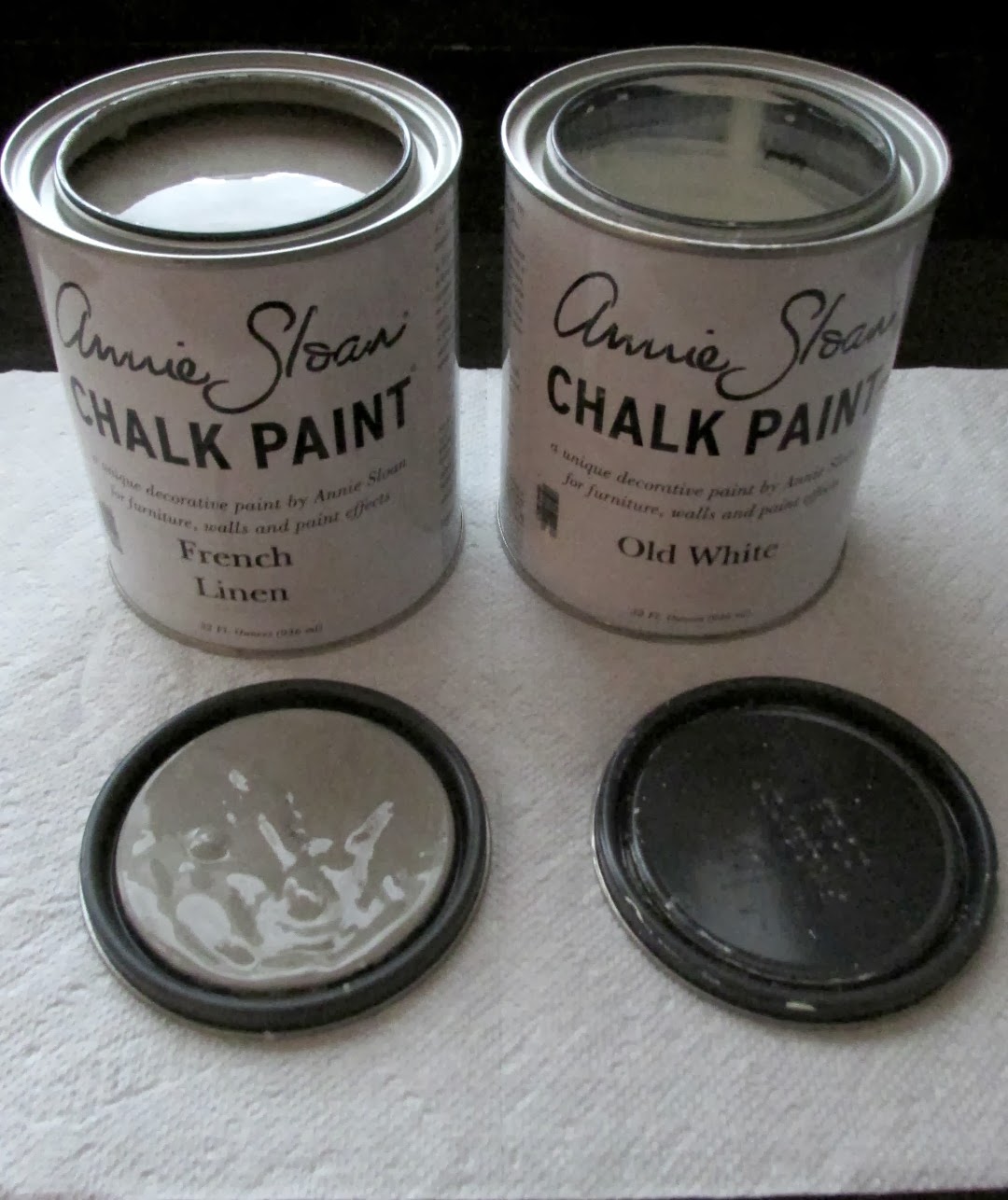 Yep!  The one on the left has just been opened for the first time!  My tried and true Old White (the one on the right) is about half full and was used to paint 2 dressers, dry brushed a mirror, and used some of it to create a wash on a vintage vanity.  I still have about a half can left...and look at the lip of the can?  NO CRUSTY STUFF.  Look at the lid of the can!  Clean as a whistle!

Some stockists encourage you to turn a brand new can upside down for about a minute to get all of the good stuff off of the bottom.  I've decided, I ain't doin' that!  (I'm such a rebel! Ha!) A lot of paint seeps into the rim of the lid, eventually starts to dry out and then the paint becomes littered with little crusty bits.

Instead, I take some slightly damp paper towel and place it into the groove of the can. 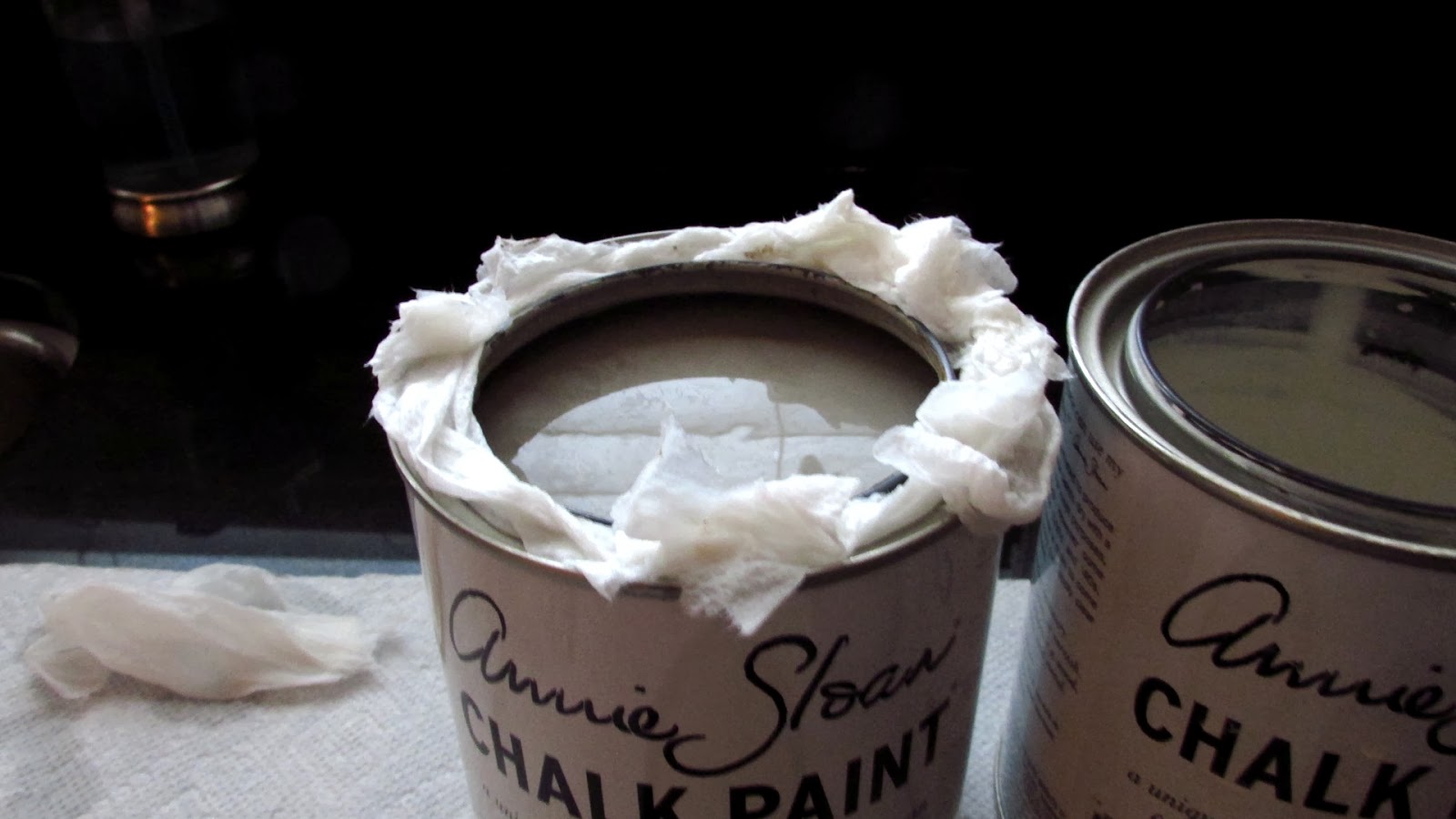 I then stir the can really well (just as you would stir stain, or shellac) with a plastic spoon.  After the can is sufficiently mixed, I start painting....leaving the moist paper towels in the grooves.  Once I've finished painting, I pull up the paper towel, run it around once underneath the lip, and seal her up.  The paint can and lid are both clean, and there is no paint left to dry out and become that nasty stuff.

It's not very scientific or glamorous looking, but it sure does work!

Now if someone has a good recommendation for some amazing hand cream, please share!  My hands are so chapped this winter!  :)

I hope this finds all of you well...Happy Clean Painting!

On the job training - Problems with a wood grained top

Happy New Year!  It’s be awhile since I’ve added a post here.  The holidays kept me busy with family and painting….but I couldn’t squeeze in writing blog posts.  There are only so many hours in the day, and writing a post or two was what I chose to give up.  I’ve seen a lot of New Year’s Resolution from folks vowing to find balance in their lives.  It’s a hard thing to find, but as you get older, your priorities become clearer and that helps you to find your balance.  Being overwhelmed is what creates the ‘fog’, so when you’re feeling  that way, perhaps that is a clue to step back, re-evaluate, re-prioritize, and then take the necessary actions to ‘clear the fog’ which will help find the balance.  I’ve also found it is okay for the priorities to fluctuate.  Perhaps missing a soccer practice is okay, but not the match.  Or how many nights a week do I spend on the computer or in the shop, instead of reading a good night story to my little one or connecting with my significant other?  These are questions we can only answer for ourselves.  What works for me may not be the right thing for you and your family.  But when you realize you may have lost your balance, let that be your signal to look for it…

Enough of my two cents about life…Let’s talk about OJT.  Oh yea…I learn something new with every project.  Rarely do I start and complete a project that is completely smooth sailing.  This lovely French dresser was no exception.

It had an unusual finish…looked like a colored stain.  I could see the grain of the wood, but the color was a wash of a yellowish, grayish, speckled, something!  Ha!  There were some very faint gold hightlights on the high ridges of her curvy parts.

I got busy stripping her top…As I always say, “Let’s see what’s under the hood”.  Oh my goodness….pure as the driven snow! 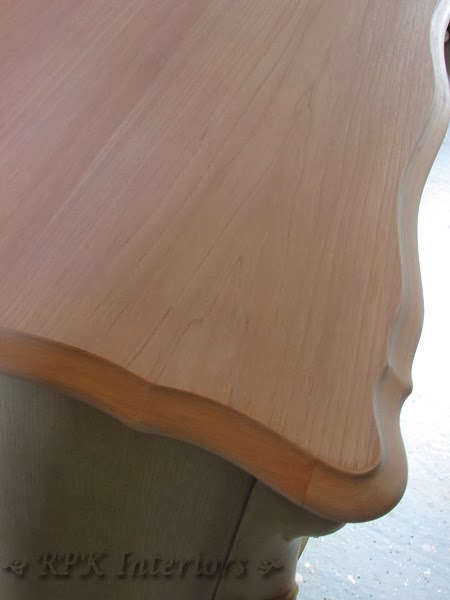 Is that the most gorgeous wood grain you’ve ever seen!  Yea baby!  I hit the jackpot!  My vision is clear…French Linen, Dark Walnut Stained Top.  Very French Country look!

I generally stop working on the top, flip the piece over and start painting.  But for some unknown reason (and thank heavens!) I decided to stain the top first.  I applied the Minwax wood conditioner (as I always do) and then the Dark Walnut Stain.

Panic starts to set in! 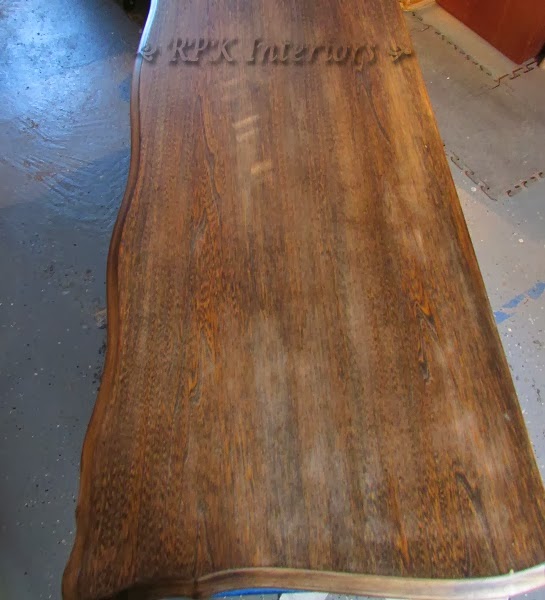 What are those cloudy spots??  Oh no!  I reached out to a few sources and received some wonderful input from my FB page (please feel free to follow me along on FB at RPKInteriors).  I also found The Wood Whisperer who was kind enough to respond to a flustered note.  His thoughts were "If it's still noticeable after stripping and sanding, the outlook isn't great.  That's an indicator that the oil stain is quite deep.  Only thing you can really do is sand/plane/scrape the surface until you get below the discoloration."

Yea...that's not happening.  I have already devoted a lot of energy to this top.  It is now time for me to "know when to hold 'em and when to fold 'em" (singing along with Kenny Rogers!).

I painted her in ASCP Old White.  A little light distressing and lots of waxing. 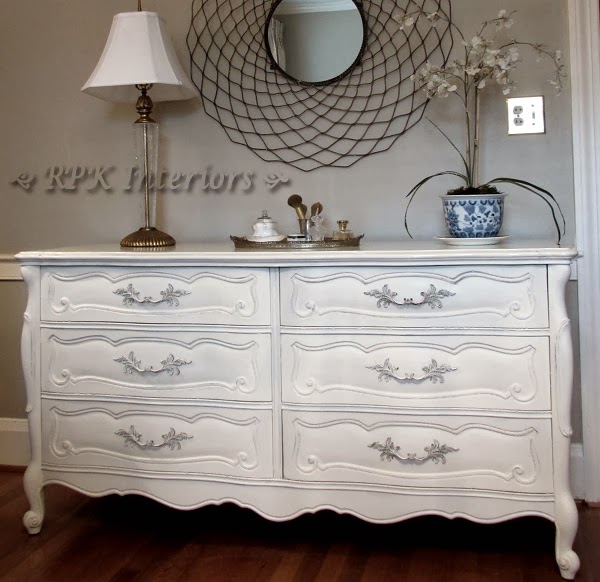 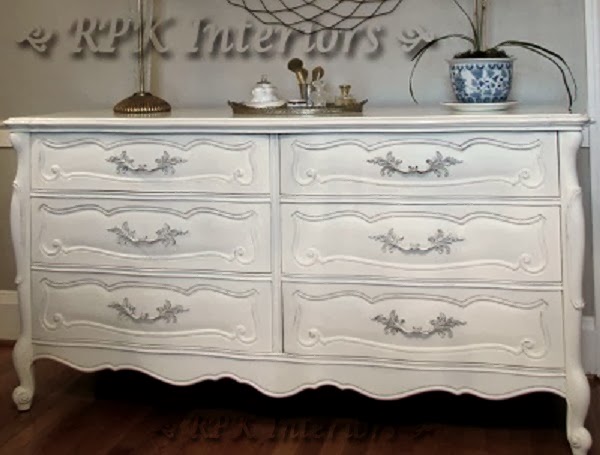 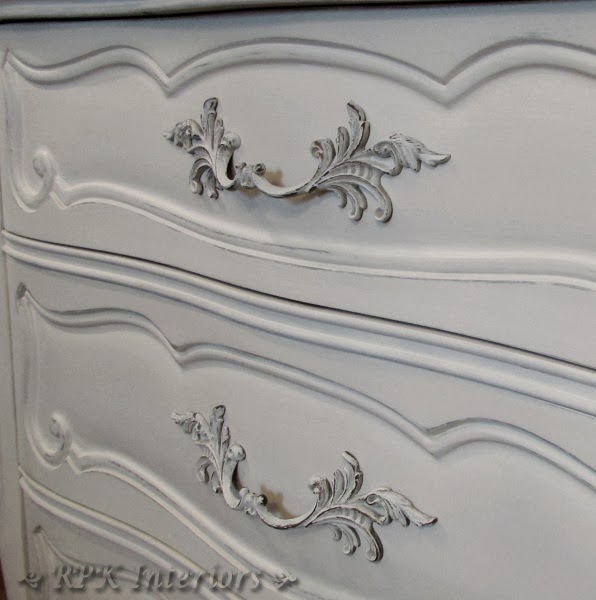 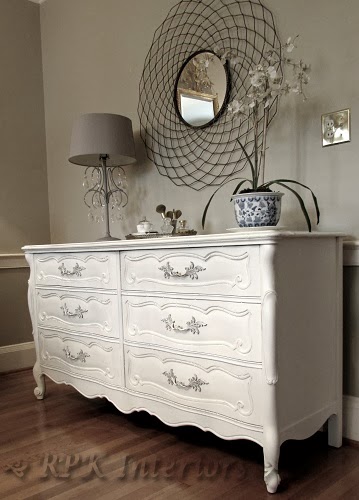 If you have ever run into this issue before and have some thoughts on how to overcome the cloudiness in the finish, I would be most appreciative of your input.  My guess is I will see this again one of these days.  There was no way for me to foresee it after I stripped it, but unless I have some new ideas on how to overcome it, I'll move to Plan B and paint it.  My first option is generally to 'save the top', but sometimes we have to know when to move along!  :)

Thanks for stopping by!

RPK Interiors
I'm learning the art of breathing new life into old treasures. Finding quality pieces and transforming them for someone new to love and appreciate gives me such pleasure. I guess in a way it's my way of paying homage to a part of my past. I hope you'll enjoy following me as I wind through this new journey!

I Was Featured At: 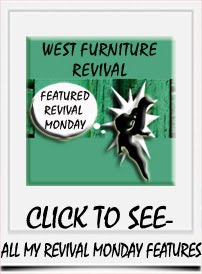